The Promises of CRISPR Genome Editing in Biomedicine – Labiotech.eu

The Promises of CRISPR Genome Editing in Biomedicine – Labiotech.eu

Tony Ho, Head of Research and Development at CRISPR Therapeutics, offers his insights into the advantages of CRISPR gene editing over other technologies and what the future holds for the genome editing field.

For decades, gene editing required engineering DNA-cutting enzymes, such as zinc-finger nucleases (ZFNs) and transcription activator-like effector nucleases (TALENs), for every specific genetic modification. The advent of CRISPR-Cas9, a gene-editing tool that only requires a custom guide RNA molecule to find its target, revolutionized the field.

CRISPR gene editing has quickly risen in popularity as a research tool because it makes genome editing much simpler and faster than ever before. The technology is also being researched as a potential treatment for a wide range of genetic diseases.

That is the case of CRISPR Therapeutics, a company that is running clinical trials testing the technology in two blood conditions as well as in cancer. Tony Ho, who leads research efforts at the company, shares his views on the potential of the technology and his expectations for the future of gene editing. 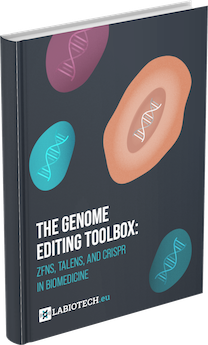 This interview is part of Labiotech’s report “The Genome Editing Toolbox: ZFNs, TALENs, and CRISPR in Biomedicine.”

Become a member to get full access to this and many other reports offering a deep insight into the hottest areas of the biotech industry.

Genome editing technologies have been developed at a rapid pace over the past decade. Within the past five years, a novel system has been developed based on fundamental research of bacterial systems’ immunity to viral infections.

CRISPR-Cas9 is based on RNA-guided targeting and is much simpler and faster than earlier methods. The ease of design, together with the remarkable specificity, efficiency, and versatility of the CRISPR-Cas9 system have revolutionized the field of genome editing and enabled rapid development of novel therapies.

The advent of programmable nucleases has accelerated the development of gene editing from concept to clinic. Current advances in genome editing tools allow us not only to target monogenic diseases but also polygenic diseases, such as cancer and diabetes. Genomic editing also provides a degree of precision not previously possible by other therapeutic approaches through its ability to target individual cell types.

It also allows us to build on synthetic biology [techniques] that confer novel abilities to the cells. With these abilities, we can develop potentially curative therapies that may not be possible using traditional modalities.

Additionally, CRISPR-Cas9 has the potential of simultaneous multiple loci editing, making the technology easier, more efficient, and more scalable compared to other genome editing technologies. The programmability of the CRISPR-Cas9 system allows rapid prototyping of different therapeutic approaches, which leads to faster development cycles compared to other genome editing approaches.

What are the main challenges and limitations of genome editing tools?

While manufacturing is considered a challenge for the field, it is not a fundamental limitation. Companies are committed to overcoming challenges in order to bring medicines to patients at scale.

Additionally, it’s important to push the boundaries of what genome editing tools can offer to medicine. For example, it’s critical to move the field beyond therapeutic areas of rare diseases and hematologic malignancies, and into common diseases, like cancer and diabetes, where there is the potential to continue to see a dramatic impact and benefit to patients.

How do you expect the genome editing field to develop in the future?

We expect to see increased enthusiasm for the gene editing field, particularly around CRISPR-Cas9, as it is a powerful platform that is facile and scalable. We believe the next generation of cell therapies will be driven by increased edits. We have published papers at oncology conferences that demonstrate that CRISPR-Cas9 can generate perfectly viable and enhanced CAR-T cells with 10 or more edits.

This interview is part of Labiotech’s report “The Genome Editing Toolbox: ZFNs, TALENs, and CRISPR in Biomedicine.”

Become a member to get full access to this and many other reports offering a deep insight into the hottest areas of the biotech industry.

What do you expect CRISPR will achieve in the next decade?

CRISPR-Cas9 is a revolutionary tool that can change the future of medicine. At CRISPR Therapeutics, we have five programs in the clinic, led by our two hematology programs, where we have demonstrated that a one-time CRISPR-based treatment can result in a functional cure for patients with sickle cell disease and beta-thalassemia.

We also have three ongoing clinical trials for allogeneic CAR-T therapies targeting B-cell malignancies, multiple myeloma, and renal cell carcinoma. Excitingly, we showed positive topline data in patients with relapsed or refractory B-cell malignancies, which demonstrate the potential of CRISPR gene editing for the treatment of cancers. We believe a number of cancers could be cured with CRISPR-based treatments, and we could replace a number of diseased or defective organs with regenerative medicine.

There is a world full of possibilities for CRISPR applications and I am very hopeful about what the future can bring.